Cantine Settesoli and Mandrarossa, the story of a community that is surprising more and more 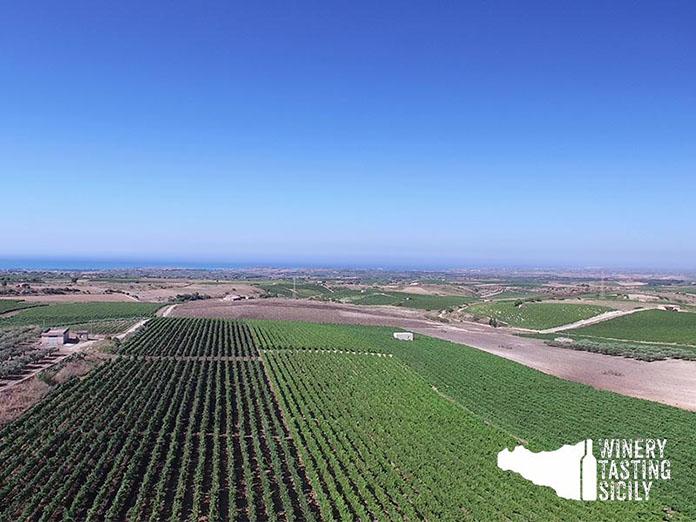 Learning more about Settesoli means discovering the history of Sicily, its natural beauty and the strength of its people. The name refers to a famous gift that Don Calogero Sedàra offers Angelica as a dowry to marry Tancredi, the beloved nephew of the Prince of Salina, in The Leopard, the famous novel by Tomasi di Lampedusa. But Settesoli also means the Nature that blesses the south-western coast of Sicily, the lands of the ancient Sicanians, with seven months of sunshine, from March to October, giving life, together with soils that are unique for their biodiversity, beautiful vineyards that span fifteen kilometers around the town of Menfi. Discovering the history of what was initially, in 1958, the Cantina Sociale di Menfi, means learning about the dignity, ingenuity and commitment of the local farmers. They were eighty-eight winegrowers who, tired of selling off the grapes of the few hectares of vineyards they owned, decided to join forces and make wine in a common cellar. They put together 265 hectares of vineyards, still bush-trained, and experienced the joy of their first harvest in 1965. It was the beginning of a project that today is still being pursued with the same passion and spirit of initiative, as well as with new means (in the 1970s, mechanization made it possible to transition to the counter-espalier method, resulting in today's orderly rows), sound skills and innovative methodologies. Over time, the project has been increasingly characterized by intense research work and has expressed itself in numbers: the winegrowers are now 2000 and the vineyards amount to 6000 hectares. In Menfi, you will not find a single, mega vineyard, because the individual estates own on average about three hectares of vineyards, fragmented between the hills and the sea, creating a patchwork of vineyards of different colors. The wealth of Settesoli, and its flagship Mandrarossa line, lies in its five types of soil: clayey, calcareous, loamy, medium texture, and sandy. The matrix is calcareous, from an altitude of 400 meters to zero meters above sea level and gives life to the quadrilateral of vineyards from the river Carboj to the river Belice, from the Magaggiaro woods, a large water and thermal lung that changes the microclimate of the area and ensures the difference in daytime and night-time temperatures from which some Mandrarossa vineyards benefit, to the sea with its breezes. The area is blessed given the biodiversity of the soils and the exposure, but the local men and women should be acknowledged for their ability to read, love and enhance this book of nature starting in the 1970s, thanks to the Sicilian Regional Institute of Vine and Wine, a study (truly colossal for the time) to determine where to produce the best wine. Aiming at quality: this is Settesoli’s goal and overcoming the preconceptions that saw Sicily, with its arid climate, unable to produce good wines (because, as it was wrongly argued, the heat burns the scents and the low acidity allows only blending wines). It was Professor Attilio Scienza, a guru of Italian winemaking, who believed in the potential of Menfi and continued the project of creating the 5 experimental fields to better understand how 40 identical varieties, both indigenous and international, adapted to the different soils. Each experimental field had an area of one hectare, containing all the varieties, and was studied from a vegetational, productive and microvinification point of view for fifteen years, to discover how each terroir could best express itself in the production of a unique quality wine.

In 1995/96 the great change began. The old vineyards were grubbed up and the new ones were planted: about 4500/5000 plants per hectare, based on the study results and joint decisions. In 1999, the first Mandrarossa line was launched, with the zoning of areas of excellence in Menfi, this too in collaboration with Prof. Scienza. Mandrarossa vineyards now make up 10% of the Settesoli vineyards and are the subject of a new experimental project that aims to surprise us once again. The synergy between the strength of nature and the passion of men and women can be felt in Menfi and its surroundings; it is its strength. You can listen to it, see it and find it in wines that express it in all its authenticity and richness. One is left speechless when, in a strip of uncontaminated land, one can see an inlet nestled between vineyards and the sea of amazing beauty, an enchanting place where the queen is said to have bathed naked, and is pleasantly surprised to find the lightness and pleasantness of that place in the latest addition to the Mandrarossa family that bears the name of that beautiful beach: Calamossa. At this point, I believe that "The Mandrarossa Vineyard Tour 2018", which will be held from 1st to 2nd September, will hold great things in store!

There are no more articles for this category